The Vikings Were Here—Along With Everyone Else

My flight left SFO 2 hours late. Late in first class is better than late in coach, but it’s still late. Better food, wine in glass glasses, but we were as late as the people in the very last row.

So I arrived at Heathrow in the middle of the morning rush hour. Fortunately, they speak pretty good English here, so I found the Piccadilly Line of the fabled underground (subway). I took it for an hour to the huge downtown station of St. Pancras, and switched to a regular train for the shorter trip eastward to Canterbury. After a 10-minute cab ride I finally arrived at my charming little cottage.

“Charming” turned out to mean a lack of right angles, and encouragement to see “patina” instead of wear, inadequate maintenance, and the well-known British sense of wry acceptance. Some 10 hours after today’s noontime arrival, I continue to do my best.

The world-famous Cathedral is down the street. But wait, let’s slow down a bit and give successive waves of people and events their due. And consider yourself introduced to Liz, my guide for today and tomorrow. She’s 69, far more spry than I, and 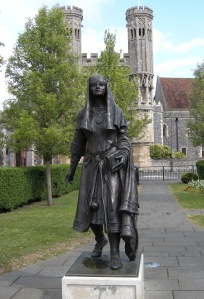 Today’s hit parade started with Queen Bertha of Tours (France), who married Ethelbert, the local King of Kent in the 7th century. Her wedding contract specified that she’d be allowed to bring her Christian faith with her, and so of course she built a church here after unpacking and getting
organized. I visited that 7th century St. Martin’s Church, the oldest continuously-used church in Britain. Its front door was fitted into a large Roman-built wall–300 years old when she found it.

The Vikings eventually came, camped on the river, and did some raiding–leaving evidence all over town. They were eventually supplanted by the Normans, led by William the Conqueror–who began the earliest version of what became the Cathedral. Fast-forward through the Plantagenets and War of the Roses, and soon we have King Henry VIII not just establishing a new Church of England, but dissolving the monastery system and grabbing Church land and wealth across the country.

Here in Canterbury he turned one monastery into his own local pied-a-terre. He wanted it used for his wedding to wife number 4, Ann of Cleves; records show he hired 300

plasterers (and hundreds of other workmen) to clean up the place in time for a December wedding; apparently they moved heaven and earth trying to get the stuff to dry in the middle of a very wet winter. The complex eventually became a school and was redone almost two centuries ago by the Victorians. The school is gorgeous; a single, enormous wall is all that’s left from Henry’s time.

I ran into Henry’s Dissolution of the Monasteries many times during last year’s trip to Ireland, and it already figures prominently here. More on that as the week unfolds.

We had hoped to stroll through the town after afternoon tea, but rain and wind arrived with a vengeance. We hustled past the church where Christopher Marlowe was baptized, an inn Charles Dickens wrote about, an inn mentioned in the Canterbury Tales, and then I ducked into the magnificent cathedral to catch the Evensong service.

No, it wasn’t a fit of sudden devotion, but a great musical opportunity. The organ was gorgeous, the cathedral choir was crisp and haunting, and there was even a reading from Genesis on the wandering Israelites eating manna. I lingered a bit to look at some of the cathedral’s endless vaulting, but I hadn’t eaten since my in-flight arrival breakfast, and I needed sustenance of my own.

Authentic Thai food—in the midst of English “cooking,” like manna from heaven!