Day 7: Time Out for Trains

That sound you hear is Europe’s largest train museum calling me, right here in York. I didn’t even try to resist.

I spent most of today there, and barely scratched the surface of the place. The world’s first actual train (1831). The royal carriages designed by Queen Victoria and each of her various royal descendants, including Queen Elizabeth—truly palaces on wheels. The loco with the largest wheel ever (diameter 8.5’). The fastest steam train ever (125 mph). Dozens of glorious beasts with parts now all shiny, each one with a million soot-covered stories.

Specialty stuff: a hospital train that ferried the wounded away from WWI battlefields. The last steam locomotive ever built. A working turntable (with a cool demonstration). A diesel locomotive with the steel side panels cut away, exposing its innards. Perhaps best of all, a 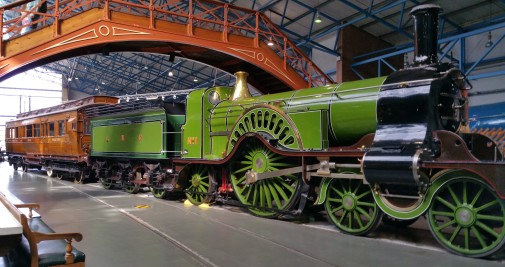 walkway built beneath a steam engine, providing a view of the machinery I certainly had never had before.

A knowledgeable and generous docent named David showed me around, his stories bringing the exhibits to life. He explained how a steam loco re-watered while driving 50 miles per hour, deftly sucking up thousands of gallons of water from strategically placed troughs along the tracks. “A train man had to be really good to manage that,” he understated. David also talked at length about the working partnership between driver and fireman. “The drivers made more money,” he said, “But they said the firemen had more skills.”

There was a huge exhibit about the Flying Scotsman, the name of both a famous train and a famous route—London-to-Edinburgh in just a few luxurious hours. After leaving active service the locomotive was almost scrapped. Public outcry (and private money) saved it—and a succession of famous owners have been exhibiting it (and losing money doing so) ever since.

The place was, of course, filled with kids. And although I didn’t enjoy their continuing squealing, I was glad they were there. We need to spark every generation’s engagement in the romance of this extraordinary technology that transformed the 19th century, making the 20th possible.

This entry was posted in 2019 England's Wars of the Roses, history and tagged flying scotsman, steam trains, trains, WWI. Bookmark the permalink.

1 Response to Day 7: Time Out for Trains