I had a perfect day today at York Minster (Cathedral). I started below it, continued above it, and finished in the center of it. 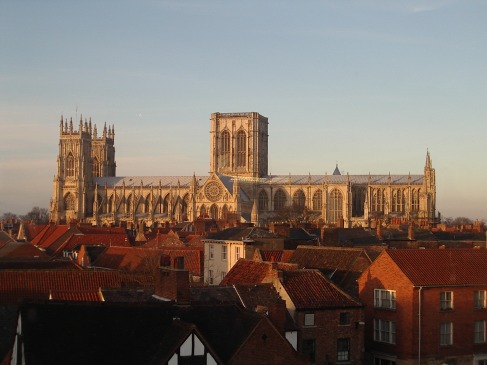 The first church on the site was built in 627CE. One big fire and a few Viking raids later, it was again damaged (along with the whole rebellious area) by William the Conqueror in 1069CE.

As soon as things settled down politically, work began on a grand Norman stone church. A century later, plans changed to showcase the snazzy new Gothic style imported from the Continent. York’s Archbishop ordered that the cathedral be built to rival Canterbury (its only architectural competitor to this day), damn the expense. It’s now the second-largest Gothic cathedral in Northern Europe.

I started the day with a special tour of the underground crypt. Protected down there from the wear-and-tear of everyday use, it is remarkably well-preserved. Our passionate guide lovingly showed us features of the Roman, Norman, and Gothic foundations, as well as later medieval and Victorian upgrades.

With all the old stone I’ve seen around the world, she showed us something I’d never seen: mason’s marks. These are monograms inconspicuously chipped into finished stone so the accountants would know how much to pay each craftsman. Using a flashlight, she also showed us tiny parallel striations meticulously scratched into the stone surface that would catch the light and make the stone shimmer.

The next special tour continued our affinity for stone. Leaving the building, we entered the stoneyard to see and touch the cut-to-order blocks of limestone arriving from the same quarry as the original stone that built the cathedral. Then we went to the masons’ actual workshops, talking with the masters who map and draw the individual stones, and observing the journeymen who were chip, chip, chipping away, creating hand-carved replacements for stones (including gargoyles, window ornaments, and vaulting) that need replacement.

The artisans spoke humbly about working in tandem with their brilliant predecessors of 600 and 800 years ago. I myself have a tiny taste of this when I play music written during the Renaissance—communing with a fellow artist (albeit one far grander than I!) to produce the sound he imagined when he composed.

Exiting the workshops we donned hard hats and took a construction elevator nine stories up. We walked the scaffolding surrounding a section of the Cathedral under renovation. We got to see and touch the carvings, repairs, and windows that mortals normally see from 100 or 200 feet below. We could watch the painstaking work of artisans, alone out there in the cold, chiseling an angel’s expression, or curling a saint’s toes. No one down below could possibly see the difference if a mason stopped short of perfection. But the masons up here knew no other standard for their work.

After a brief rest and late lunch (another tiresome pizza—if only these Brits could cook the way they used to build!), we returned to the Cathedral. The medieval glass is still beautiful—transcending centuries is the point of the artform. The soaring vaulting, the contrasting Gothic styles facing each other, the lachrymose memorials to dead soldiers, dead children, dead dreams, all combined to reduce our voices to whispers and slowed our pulses. They walked these floors twenty generations ago.

Among those buried there are Thomas Bayeux (who commissioned the Bayeux Tapestry, narrating the Norman Conquest of 1066) and the infant son of 14th-century Edward III.

We walked into the Cathedral’s largest chapel for the Evensong service, mostly to hear the music. There was some chanting by the choir of twelve. And the Psalms that were recited 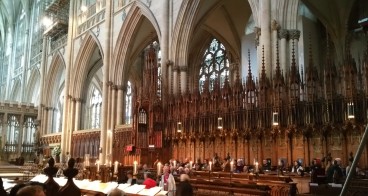 were familiar, if repetitive. But I received an unexpected jolt when the Minister read the scriptural portion about the Jews killing Christ. I am not making this up—the week’s portion was about Pilate offering to free the arrested Jesus, but the Jews passionately objecting. And so Pilate ordered Christ killed.

Architecture, artisanship, and history aside, I was, after all, in an old Christian church. Hearing a very old—and very modern—Christian story.