Day 11: A Day in the Country at Conisborough

Today we drove south into Yorkist country, and headed for Conisborough Castle. It sat on the sidelines during the Wars of the Roses, but it’s an architectural gem with a quirky history. 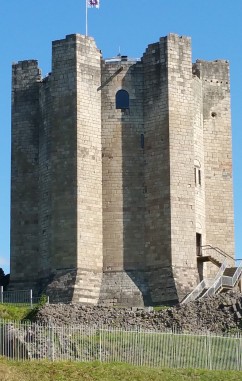 The castle was built by William, Earl of Surrey who had taken part in the Norman conquest of England in 1066. He was rewarded by his father-in-law William the Conqueror with extensive estates, including the land on which to build Conisborough.

Several generations later it pass through marriage to Hamelin Plantagenet, the illegitimate half-brother of King Henry II. Hamelin extensively rebuilt the castle in the 1180s, including the gorgeous stone tower. If you’re a fan of Magna Carta you’ll enjoy knowing that King John visited the castle in 1201.

Eventually Edward III gave the castle to his son Edmund, Duke of York. Two generations later it was inherited by Richard of York—who had, you’ll recall, tried to seize the crown from Henry VI, but died at the Battle of Wakefield in 1460. His son Edward then inherited it, and when he seized the throne as Edward IV at the Battle of Towton in 1461, the castle once again belonged to the Crown.

It gradually fell into some disrepair, but it wasn’t attacked, Cromwell didn’t destroy it, and so it sat there accumulating a lovely patina. In 1811 Sir Walter Scott rode by and later used the location for his novel Ivanhoe. That made the castle a tourist attraction, so a century

later the government restored it, and it’s now glorious again.

It’s an innovative design, with polygonal corners to improve its defense, and walls that flare out at ground level to discourage undermining during sieges. The sun came out as we we climbed the tower, and it shown straight through the window of the Lady’s Chapel on the third floor. The commanding views from the parapet were peacefully stunning.

From here we continued driving south to Leicester, where we had a date with a king.

This entry was posted in 2019 England's Wars of the Roses, architecture, castles, English history and tagged conisbrough, Walter Scott. Bookmark the permalink.